DIS is a ready-made investment arrangement mainly designed for those members who are not interested or do not wish to make a fund choice, and is also available as an investment choice itself, for members who find it suitable for their own circumstances. For those members who do not make an investment choice, their future Investments will be invested in accordance with the DIS. The DIS is required by law to be offered in every MPF scheme and is designed to be substantially similar in all MPF schemes.

Diagram 1: Asset Allocation between the DIS Funds according to the DIS 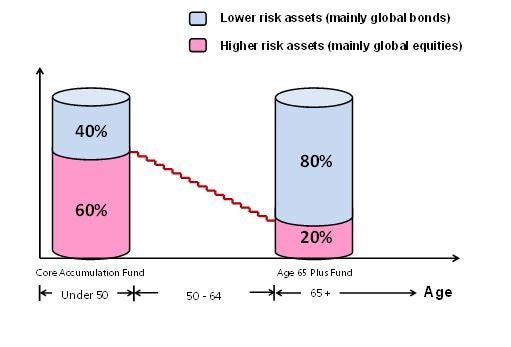 Note:    The exact proportion of the portfolio in higher/lower risk assets at any point in time may deviate from the target glide path due to market fluctuations.

Accrued benefits invested through the DIS will be invested in a way that adjusts risk depending on a member’s age. The DIS will manage investment risk exposure by automatically reducing the exposure to higher risk assets and correspondingly increasing the exposure to lower risk assets as the member gets older. Such de-risking is to be achieved by way of reducing the holding in the CAF and increasing the holding in the A65F over time. The asset allocation stays the same up until 50 years of age, then reduces steadily until age 64, after which it stays steady again.

In summary, under the DIS:

If the Trustee does not have the full date of birth of the relevant member:

The total amount of all payments that are charged to or imposed on the DIS Funds or members who invest in DIS Funds, for out-of-pocket expenses incurred by the trustee on a recurrent basis in the discharge of the trustee's duties to provide services in relation to the DIS Funds, shall not in a single year exceed 0.2% of the NAV of each of the DIS Funds. For this purpose, out-of-pocket expenses include, for example, annual audit expenses, printing or postage expenses relating to recurrent activities (such as issuing annual benefit statements), recurrent legal and professional expenses, safe custody charges which are customarily not calculated as a percentage of NAV and transaction costs incurred by a DIS Fund in connection with recurrent acquisition of investments for the DIS Fund (including, for example, costs incurred in acquiring underlying investment funds) and annual statutory expenses (such as compensation fund levy where relevant) of the DIS Fund.

Members should note that the DIS is subject to various risks and limitations, including:

The fund performance of the DIS Funds will be published in the fund factsheet attached to annual benefit statement and other relevant marketing materials, members can visit https://www.principal.com.hk or call the customer service hotline on 2827 1233 (for Principal MPF Scheme Series 800) or 2802 2812/2885 8011 (for Principal MPF - Smart Plan and Principal MPF - Simple Plan) for information. Members may also obtain the fund performance information at the website of the Mandatory Provident Fund Schemes Authority (www.mpfa.org.hk).

B.    Implications for New and Pre-existing Accounts on or after DIS Implementation

C.    Rules and Procedures Applicable to Investment through the DIS

Members who join the Scheme on or after the 1st April 2017 may choose to invest their future investments into1:

Members can switch into or out of the DIS at any time, subject to the rules of the Scheme. In particular, members may elect to not invest their Future Investments in the DIS while having the existing accrued benefits invested in the DIS, or vice versa. Partial switching in/out of the DIS is allowed. Members should, however, bear in mind that the DIS has been designed as a long-term investment arrangement. For the avoidance of doubt, DIS will cease to apply to any benefits withdrawn or transferred out of the Scheme, whether or not the withdrawal is a partial withdrawal and regardless of the circumstances (e.g. refund/payment of statutory long service pay/severance pay). Benefits invested in the DIS and remaining in the Scheme will continue to be subject to the DIS.

The de-risking is to be achieved by annual adjustments of asset allocation gradually from CAF to A65F under the DIS. Save for the circumstances set out in this section, switching of the existing accrued benefits among CAF and A65F will be automatically carried out each year on a member's birthday and according to the allocation percentages as shown in the DIS De-risking Table as shown in Diagram 2 above. If:

(a)    the member's birthday is not on a dealing day, then the investments will be moved on the next available dealing day, or

(b)    the member's birthday falls on 29 February and in the year which is not a leap year, then the investments will be moved on 1 March or the next available dealing day.

The smallest amount of units of the A65F and / or the CAF that can be issued in the annual de-risking under the DIS shall be rounded down to 3 decimal places.

Members should be aware that the above de-risking will not apply where the member chooses CAF and A65F as standalone investments (rather than as part of the DIS).

(a)     subject to (b) below, an instruction for investment allocations which meets the following requirements:

(c)     any confirmation by a member (whether made verbally or through hard copy submission, online submission, email, IVRS (interactive voice recording system) or mobile apps) with regard to any investment arrangements of the existing accrued benefits and / or Future Investments.